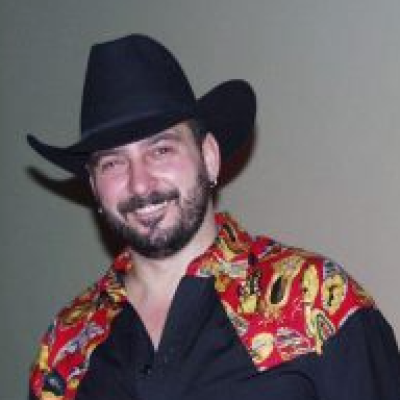 Born on 4th January 1964 in Perth, Western Australia (W.A).   I lived most of my life up until 1987 in a small farming town in country W.A called Dalwallinu. Options for dancing in a small town growing up were very limited.   I remembered mum let me go do “Disco” dancing lessons after school, but they didn’t last long, not many students…I do remember “The Crunch” though.   Wanting to do dancing in a small country town didn’t work that well in my favour.   I had a few good mates, but I did get laughed at a bit.   Being different in the 70’s and 80’s in a small town did attract names I can’t repeat.  My parents gave me one option after school, become a mechanic the same as my 2 brothers and my Dad.   So that was it, I learnt my trade on trucks, tractors, harvesters and Toyota’s.   I wasn’t a sports person so  Speedway (dirt track) was the blood of our family.   I raced from 14-24.

One friend was interested in the big dance craze called Bootscooting (or Line Dancing).   It was across America and Melbourne had the craze too.   Perth didn’t have any he could find but after listening to a community radio, he heard this lady called Gina talking about some country dancing called clogging?   He talked us into going one night.   We went along in 1988 and the cloggers and Gina made us feel special and so very welcome.   She offered us our own group beginner class if we got enough people.

We started clogging approximately in July 1988 in Subiaco, Perth, W.A under the American Instructor Gina Zaragoza.   Gina was a magnificent teacher, although a bit strict at times, she helped start the clogging community in Australia.   Gina’s group was called the Kangaroo Kloggers Klub-yes KKK!   Not very well thought out and to call it that now you would shudder at the thought.   Our first beginners class had 22 guys, the next week 10, the week after 5, until it was just my partner and I.   We then just joined in with this bunch of accepting, friendly people. Gina used to encourage me and but felt proud I could finally do something other than working on cars! Gina introduced us to other International Instructors when her club KKK hosted the first convention weekend I ever went to in Perth.   This had instructors from the USA, Elaine Steele, Kevin Sellew and Mr personality himself, Jeff Driggs.

I continued to learn under Gina until shifting to Melbourne in April 1992.   I had learnt up to Easy Intermediate level only as I just wanted to dance as fun and considered anything above this to be too hard, too much effort, I wouldn’t be able to do it.    As soon as I shifted to Melbourne, I started country and western dancing (bootscoot) with Melbourne Bootscoot.   I did two clogging classes with Patti and Mary Nuske but felt a bit out of place.   They were welcoming but I was nervous about being myself.   Melbourne Bootscoot soon changed to NFDA (New Frontier Dance Association) where I was learning line dancing, two stepping, waltz and more.   I was soon asked to start a class of clogging.   After a few false starts we had a small regular group of cloggers, so we needed a name?   We came up with the name of The Rainbow Cloggers.

Rainbow Cloggers started and it took a while for me to find my feet as a teacher and I often found myself being strict like Gina.   I do think I was too hard on beginners and damn fussy with style, but I eventually settled in like a duck to water.   I look back now and think Gina created a monster, a strict teacher with an OCD student?   What a recipe!   At the time my name was getting some interest around the scene and I was constantly turning down requests to start classes outside of Rainbow.   In the end, with me teaching, Gina was probably what made Rainbow Cloggers so unique.   So yes, I do thank Gina and appreciate all she did for my clogging and for clogging here in Australia.

While on my first International holiday in 1995, a small group of Rainbow Cloggers (four, including myself) performed in San Diego at the International Gay Rodeo.   Everyone there welcomed the “Aussie” guys, we were like celebrities.   We also performed in Los Angeles, San Francisco and Seattle. While in San Francisco, I joined in at rehearsals with the men’s precision clogging group “Barbary Coast Cloggers”  and also attended Janice Hanzel’s classes.  I was blown away.   I even went and watched Barbary Coast Cloggers perform at a Harvest Festival out of town.   Dancing on boards on drums, weaving, etc. all exactly in unison.   They had loved our precision and style at the Rodeo too! I felt very proud, we were as good as anyone we watched perform on our travels.

After my first holiday in 1995, I came home totally addicted to clogging and I started the Outback Cloggers within weeks of coming back.   The first few beginners’ classes having over 40-line dancers or boot scooters! Quite intimidating.   Those first few months with so many people were stressful but so very rewarding.   I had made a name for myself with Rainbow Cloggers and people wanted to learn from me.   Classes expanded to cope with demand, I started to handle the keen dancers who wanted to learn clogging!   For 2 years I was self-employed teaching 4 clogging classes a week with lots n lots of people!   Apart from the normal clogging classes, from beginner through to advanced, I also ran STEP classes and FORMATION clogging classes.   STEP was as it says, learning different steps only, not a routine.   FORMATION clogging was teaching people moves like square dancing, weaving, crossing, partners, patterns, etc.   It was definitely a great time for me.

I toured again with the Rainbow Cloggers in 1997 (12 of us this time) again performing in Los Angeles, San Francisco and Seattle, and they also toured a few times after that without me.   They also attended and won a Gold medal for my choreo and tuition at the Gay Games in the USA, to a Madonna Medley.   Rainbow Cloggers were known for their precision and uniform style.   Proving a routine doesn’t have to be hard to be spectacular, just dedication to dancing together.   They always made me very proud and I was very sad to see them finally stop in 2016? I had not known or considered entering any competitions in the USA. Clogging in Australia has always been a social get together with some demonstrations or performances.

I have run my own weekend called “CLOG ON” many times over the years.   With the help of the other teachers and groups, all financed through holding fundraising events, socials, trivia nights, etc.   After a lot of fundraising, I held the second “CLOG ON” at Easter in 1999 with a record 3 U.S.A. instructors, Janice Hanzel, Ed Hooten and Jeff Driggs!   A record still not broken in Australia as far as I know?   Over the years this has morphed into a combined weekend with my best clogging friend and buddy Cheryl Holland.   We also occasionally have had international instructors including Missy Shinoski, Ed Hooten again and Barry Welch.   We now run the weekend every second year, alternating with Irmgard Huddy in South Australia. Irmgard’s Clogtober is a fantastic weekend I fully recommend.   They support us, and we support them.

Outback Cloggers were very successful for me.   We did demo’s at shopping centres, Bootscooting nights, pubs and festivals. People were excited to come to classes, our own community.   Over the years, numbers dwindled as lives got busy.   I eventually closed Outback Cloggers after after I closed my own Mechanic garage in inner city Suburb of Richmond and moving out to the western suburbs,  as it was just too far to travel.   I was working 5.5 days a week in the western suburbs, traveling thru peak hour traffic to inner city Melbourne, and I thought I’d had enough.

Guess what?   Sure enough, 4 months later (long retirement huh?) I was back teaching advanced with John Bishop in the inner western suburbs.   We had some fun learning and teaching to a small handful of dedicated cloggers.   Eventually it didn’t have the numbers to survive on it’s own night but a great challenge.   It inspired me though and decided I hadn’t finished yet, so I started an inner western suburbs clogging group in Footscray  called “City West Cloggers” in August 2010 which I still run today.   Again, cloggers are the best people.   We have ups n downs, busy and quiet times, but we are dedicated to each other.

Currently, I am president of the Australian Clogging Association (A.C.A).   I’ve also helped run three Australian Clogging Association (A.C.A) national conventions here in Victoria.   To those held in Victoria, we’ve had Scotty Bilz, Janice Hanzel, Kelli McChesney, Jeff Driggs and Ed Hooten.   I constantly promote all cloggers to be a part of the  A.C.A, to be involved and spread the word.   We are better as a group.

I have proven to myself that I am worthwhile to the clogging community . I am continually excited that new people are starting to clog.   The only way it will survive is to make it interesting or challenging but most of all fun for people to dance and I love to choreograph with that in mind.   No matter whether you are dancing high or low aerobic, just clog for fun.   Some may call me a clown when I teach, but you can blame Jeff Driggs for inspiring that!   He still inspires me.   I clog, and I teach because I want to encourage everyone else have as much fun as I do when I’m clogging.

I have a whole different outlook to clogging now than when I started.   I  have taught hundreds to clog over the years, while most have not had the endurance of some.   Life gets in the way and I love seeing cloggers return after years away with a new passion.   I dance all levels and still enjoy clogging.   After a heart attack and open-heart bypass surgery in September 2017, I’m still clogging!   Advanced clogging as I get older is a lot harder, but I won’t give up though!

See you on a clogging floor somewhere